I've had this "syndrome" probably since college-the inability to be in the middle (middle child syndrome?). Not the middle of the road but extremes. My room was either OCD neat or it looked like Hurricane Gloria had gone through it (aw yeah. I'm dating myself here. If you were born after 1978, you probably have no idea what I'm talking about).

I either got a 3.94 GPA or a 2.97, I either had a steady boyfriend for years or I...well, I dated alot ;-). Balance is not something that comes easy to me. I don't sign up for a sprint triathlon as my first, I sign up for an Ironman and then work backwards from there.

I struggle with balance all the time. I don't just make an error, it's a catastrophic mistake. If I get an injury, I don't want to do ANYTHING. If I can't run 50+ miles a week, then I want to gorge myself on Ben & Jerry's (lactose intolerance really does not help with this) and curl up watching 20 hours of Law & Order.

My goal today, is to do what I CAN do, knowing that I can't do it all. And to adjust myself to the unexpected, getting myself to go towards my goals even if it's not in a straight path-and to accept that that path might be better than the one I intended. Ironic that I'm drawn to unpredictability yet it terrifies me as well. I think it's attached to my fear of being aware-because when you're aware, you can't lie to yourself.
Posted by Michele at 8:20 AM 3 comments:

Day #26-The power of what you think

It's amazing and it's happened to me a few times, although I think I forget about it each race. "I'm going to run x pace." Even if I hope for a faster pace, something happens where that's EXACTLY what I do. I do what, in my gut, I "know" I will do.  This time, "I'm not racing, I'm using this as a training run." How could my body end up doing anything but that?? Of course, I knew I had IT band issues and that would factor in, but I was (perhaps not so secretly) hoping it would go away for this one race. 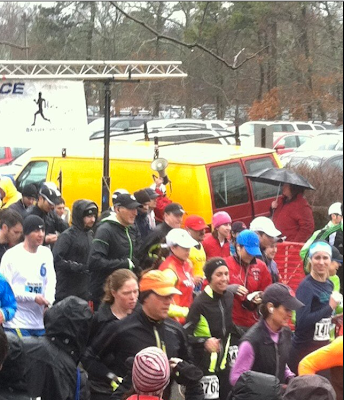 (I have a REALLY long ponytail, even when braided, apparently).

The weather was not optimal (raining, pretty windy), but the course was fair-just a few rollers. I wasn't feeling particularly "sparkly" at the beginning or before the race (husband/coach warned me I wouldn't-speed work during the week) but I felt like I could hold on out of sheer athletic ability. My IT band had other plans. Around mile 9 I developed the classic symptoms-tightness along the IT, knee giving out. When I started to take walking breaks I knew it was over, and all I could do was hold on to keep what was to do what I had originally planned- marathon pace. I know I shouldn't be disappointed-I wasn't going for a PR, but I can't help it.

Here's the rub: I haven't been doing core work, not really. Even though I know it's a big source of my IT band problems. So really, how can I be surprised that this happened? I haven't given my all.


I think you know, truly, when you've thrown absolutely everything you have at a goal-and I haven't, yet. Not truly. I'm thinking of this is my last-chance smackdown. If I go down (i.e. don't reach my goal) it's not going to be because I didn't try-and somehow that's scarier than NOT trying. What if I give my all and it's "not good enough".

Fear faced over this weekend? Being really, truly honest with myself.
Posted by Michele at 9:01 AM 2 comments:

Day #25-I've been slacking a little

Time to get back to it! These past few days I've been trying (very hard) to let go of worry. Worry is something we think we need. We're comforted by it. It's a habit that's hard to let go of (even though it's not good for us).  Like many, I've taken worry to be a best friend, a confidant. A way to convince myself I'm being proactive, analyzing every eventuality and convincing myself that was helping.

It doesn't. Only concrete ACTIONS actually do. Surprisingly, this is a very very hard trait to let go of and not having that fear can actually leave you feeling a little naked. And not the fun kind either. More like the I'm-in-front-of-the-class-giving-a-speech-naked. Oddly enough, this nakedness leaves me without any excuses not to move forward, in every sense.

I have a race this weekend- a half marathon which is not a huge deal, in and of itself for me-it's not the main goal, but the 50 mph winds are (haha) taking the winds out of my running sails at the moment. If I am able to compete, it will have to be a test of mental toughness. If the race is cancelled, then it will be a long run. A test of  a "go-with-the-flowness" and lack of control.
Posted by Michele at 3:26 PM 2 comments:

Sometimes it's good to take a look at where you and where you've come from. In just a few weeks I've done things that I never thought I would do and I've delved into subjects/things from which I would normally hide. (Still feelin' a little rock climbing high from Sunday). 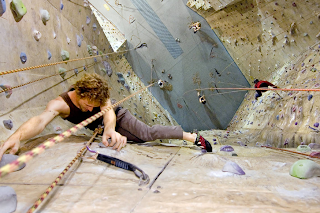 Day #23 Sometimes Being Stubborn IS a Good Thing

2nd time rock climbing-success! I wasn't on a giant wall, but I got all the way to the top!

(See miniscule wall at the farrr back) 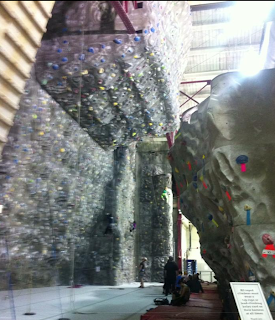 It took several tries, but I got there and went up twice! I was all gung-ho allllll week, like yeah, I'm going to do this! Then when I got there, I thought ohhhhh no I'm not! I wonder if running to Chelsea Piers put me in  a good place since running is where I'm more confident already. I definitely got a rush from achieving a goal (beating fear of heights). I wish I had more money, because I would definitely go back every week! I actually wanted to call my mother and be like SO THERE. Clearly maturity issues 1) I wanted to call my mother about this 2) I wanted to say that to her. Yup, very mature.

A great day in that I got my recovery run in after a long run yesterday (yay!) and met a previous goal today.

In reaching these goals I've spent a bit of money (not crazy, but a bit). Now I'm wondering-why is it so hard for me NOT to spend money every day? Granted, the last time I bought something was about 4 months ago...hmmm. Budgeting is HARD. How can I reach my goals while not just turning this 30 days into some sort of bucket list??

I'm going to try again to donate blood tomorrow and also to find another Toastmasters group to join-trying to fit this all in is hard-but too easy to make excuses to keep my "safe" routine.

I went to a wedding today where I swear, I knew almost EVERYONE. In a good way, this is a social circle in which I should be super duper comfortable. However, I noticed how little I have been interacting lately-hiding way is SO much easier (see below). 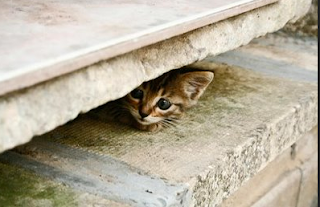 I just felt stiff and awkward and not at all like I fit in. Which is weird. Because I do (I think). Also, I haven't danced in a long time and feel like a bit of a jackass (I remember when I used to swing dance allll the time!) Good to be aware of it and things to think about. Also something to work towards (especially over the next few days: being aware-no burying feelings. THAT is scary.

Can you overlap goals on 30 days? Is that allowed? lol! I feel like I've fallen off my own bandwagon and not sure if that's possible.

My husband and I DID go out in our wedding clothes to see a VERY bad movie. The scale of suck is not big enough for how bad A Good Day To Die Hard was. Oof.

But we looked snazzy. 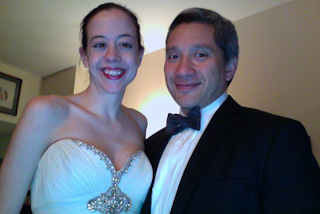 Day #21 Being the center of attention-or being ignored

As a chronic social misfit, I'm not quite sure which one is worse. I was the cheerleader that never fit in, the track captain that was too shy to talk to everyone. Social anxiety manifests itself in strange ways.

Today my husband I will go out in our wedding finery (i.e. dress and suit) and bar hop! Then off to a sure to be very, very bad movie. Maybe someone WILL notice. It's NYC, maybe no one will give a shit. Who knows. The adventure is in having fun and not quite knowing.

I'm a writer, a runner trying to come back from injury and a triathlete trying to conquer her fear of downhill cycling. It's a quirky mix.

Michele
NYC, NY, United States
As of August 13th, 2010, I have embarked on a full-time freelance writing career! Scary and wonderful, as it's always something that I've wanted!